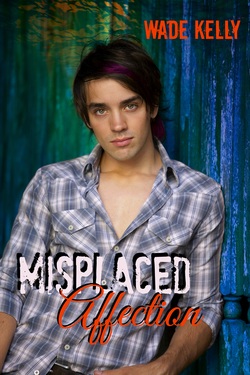 Clichés are overrated and loving the boy next door may not be as genuine as the love Flynn sacrifices along the way.

Knowing he’s gay and acting on it were two separate notions to Flynn Brewer until he’d met Keith, his first boyfriend, in high school. Before then, being gay wasn’t as real as the pain of living day-to-day. Flynn’s fear of coming out to his religious best friend Zach in their conservative community destroyed his relationship Keith, but Flynn rationalized his avoidance and bottled up the truth until it was regrettably too late.

Zachary Mitchell was the perfect son and role model as far as the outside world could tell. Active in his church while attending college, Zach had a personality that could sell anything, do anything, or be anything. Except, he couldn’t sell the truth to himself. Just when he was ready to reveal his internal conflict to Flynn and expose the darkness lurking in his heart, and in his “perfect” family, Zach met a girl and got sucked deeper into his chasm of deception.

Caught in a living Newton’s Cradle of his own design, Flynn must choose between idealistic childhood fantasy, or a tempestuous passion that could ignite the air he breathes.

This book is a Wade Kelly Special

Released January 1, 2015. This is an independent publication through Direct2Digital and Create Space. The eBook version is 576 pages LOL! but the paperback is 378.

NOTE: There were 10 grammar issues detected in the first edition. It was updated on Jan 6, and again on Jan 22nd. I hope everything is as it should be now. I apologize for my lack of skill to catch these errors :(

She loves him. I could see it in her eyes—that deep sense of longing—as she peered over her shoulder toward the ushers, family members, and friends who gathered to prepare for the day’s festivities. As workers from the cottage set chairs in rows on the grass and hung strings of white lights in the trees, “Ophelia”, as Zach called her on occasion because she looked like she had stepped out of a painting by that title, wandered farther away, picking flowers and occasionally wiping the tip of her nose. Why had I noticed? Why had I cared? Because I felt the same disconnect she wore in her expression. Only, my reaction wasn’t to pick flowers, it was to sit on a folding chair on the edge of the bustle of activity and sulk.

It was no surprise to me that Amelia was in love with Zachary Mitchell; after all, he had the kind of smile that lights up a room and personality enough to power a city. Zach was vivacious and charismatic and able to draw people in with a glance. Everyone loved Zach, so I couldn’t blame her for falling hard. The only trouble I foresaw rested with her assigned position as Maid of Honor. How would the sweet “Ophelia” handle walking down the aisle on “Prince Hamlet’s” wedding day, only to step to the left, and allow room for his bride to join him at the altar? I didn’t know.

I could imagine how hard this was for her. I had been there at Zach’s house last July, expecting burgers and an exchange of college stories, when out of the blue our annual birthday dinner turned into an engagement party. I certainly hadn’t expected it. I distinctly remembered Amelia’s squeal of delight because it pierced my eardrums and caused me to promptly cup them, but her high-pitched cry and joyful enthusiasm had been immediately followed by vain attempts to hide her tears. I’d had my own issues that day, my own internal debates and misgivings, but I would never forget the look in Amelia’s eyes as she caught me watching her. Her joy had been as bittersweet as mine.

Luckily, Gwendolyn mistook her sister’s sadness and jealousy for happiness and hugged her until she smiled again. Poor girl. She should have said something. I should have said something. But the words got stuck in my throat as I watched the happy couple, Zach and Gwendolyn, hugging and toasting. Gwendolyn asked her sister to stand beside her at the altar two seconds before Zach turned his charm my way. Keith would have kicked me if he hadn’t been standing across the room as I helplessly agreed to be Zach’s best man. I had never been able to refuse Zach anything in the past, so it stood to reason that I wouldn’t have been able to change the course of history. Of course I had accepted.

Acceptance--fuck--look where it had brought us nine months later; an outdoor wedding straight out of a Shakespearian play; complete with strolling minstrels, flutes, mandolins, Victorian gowns, puffy shirts, and poet hats. Stupid hats, they messed up my hair and covered my pink highlights. I didn’t want to be here. My only solace was that all my friends seemed just as unhappy.

As I watched Amelia stroll along the opposite edge of the wooded garden, picking flowers and sampling wild raspberries, I thought to myself how beautiful she was. Her luminescent auburn locks tumbled down her back, tendrils lifting in the slight breeze; beckoning those around her, including me, to touch, caress, and become lost in the alluring tresses. She had tucked flowers in her flowing mane as a weaver might include jewels among his threads, which made her even more stunning. She looked remarkable in her billowing white gown, and I knew without asking that she longed for Zach to notice. But he wouldn’t. Zach’s eyes were set on the fiery redhead who waited beyond the willow tree for the minstrels to start their strumming.

Our “Ophelia” would never garner “Hamlet’s” attention as she did in the Shakespearian play, which was why she chose to pick flowers instead of attending to her sister, the bride-to-be, Gwendolyn Pierce. Amelia gathered her skirts, creating a basket of fabric in her arms, and filled it as she went with red poppies, white daisies, and blue cornflowers. Oh, to be so carefree and peaceful at a time like this. She looked so serene, but on the inside I knew she was falling apart. Amelia was a casualty of war in a sense, mourning the loss of her heart with the impending phrase: “I do.” So as she stepped barefoot through the grass, weeping in silence and collecting flowers like a child, I watched and shed my own tears, mirroring her sorrow, empathizing with her pain, and dying inside because the same woeful revelation suffocated me—I was in love with Zach as well.

Fuck! The revelation hit me like a truck on a highway. Keith had been right all along.

I curled forward over my legs and cradled my face in my hands. What a mess. Less than an hour to go before this stupid wedding and I realize I’m in love with the groom, Amelia’s in love with the groom, and the poor bride is obliviously readying for possibly the world’s most clichéd wedding. The worst part, if it could get any worse, was the unsettling notion I had that Zach was actually gay.

What was I supposed to do?

I sat back and scanned the scene again after rubbing the weariness from my eyes and cheeks. Most people seemed joyous. My dad was talking and laughing with Zach’s aunt Krista, one good by-product of this event, but those included in our close-knit group of friends seemed to feel the tension. Kelly and Grace weren’t laughing; they were texting. Keith, my ex, was sitting on the opposite side of the seating area; near them but not with them, arms folded, scowl firmly affixed to his face. I wasn’t even sure why he’d come today except that maybe Grace had threatened him.

Tom and Greg were most likely with Zach, my best friend, where I should have been since I was supposed to be his best man. But how could I look Zach in the face after what had happened after the bachelor party last night?

Oh God. “I’m probably going to hell,” I whispered, thinking about what we had done. As a tear forced its way from the corner of my eye, I asked aloud, “How did things get so fucked up?”